I am struggling with feeling motivated to do my machine knitting. i know i want to do new designs and vaguely what feel i want them to have but that’s not making me do it!! I had a brief burst over the last couple of weeks as i made some cushions and pincushions for my cousin Suzannes shop – The North Rock Gallery here in Lerwick, for their exhibition during wool week.

Strangely i have started do some hand knitting. Being from Shetland i was of the last generation to be taught knitting in school (they have since stopped doing this) I hated it at the time as did many of my classmates but considering my degree and my job it obviously had no ill effect on my feelings towards knitting. At that time though, (mid 90’s) knitting really wasn’t that fashionable. Even in Shetland, We didn’t wear fair isle. Especially toonies (people from Lerwick) we saw fair isle ganseys as what yokels (country people) wore with light wash denim jeans and sambas. haha. the nineties were a time for adidas and umbro jumpers..

Anyway, i am left handed and was taught to knit right handed. i just never really understood what was going on, if you can imagine i was about 8, not really sure what i was doing and unable to be helped by my classmates because they were all doing the opposite thing to me!! well, in my new lease on hand knitting i have tried doing it right handed (the ‘English method’.. apparently) and im fine! its easy peasy.. 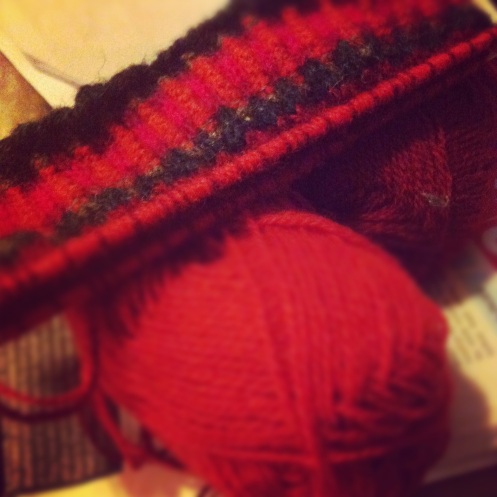 so here is my hat, a Leaves Tam from my work. Sarah that used to work with me had one and i love the colours in it. I have done the rib and reached the first line of fair isle. Progress is quite slow.. but enjoyable.

It was my birthday on Monday and i turned 22. Yuk, but i wont dwell on it. I am well past the stage of life where people me how old i am so i can just pretend otherwise.