Hello! thank you for the nice response to my Bairns Crofthoose Yoke pattern! Today I thought I begin my series on my new knit along for my Crofthoose Hat, I know there are lots of patterns we all want to knit all the time and sometimes a bit of advice or just even talking about a pattern can get you in the groove to make one.

I thought I’d begin with arguably the most fun but also sometimes stressful part of any Fair Isle project – Choosing colours!!! Of course, I have a big (ahem) stash of yarn – and a rather sizable stash of J&S 2ply Jumper Weight (I work there.. what did you expect!) That is the weight of yarn really suited to the Crofthoose hat – Shetland or 100% Wool yarn in a 4ply/fingering weight. 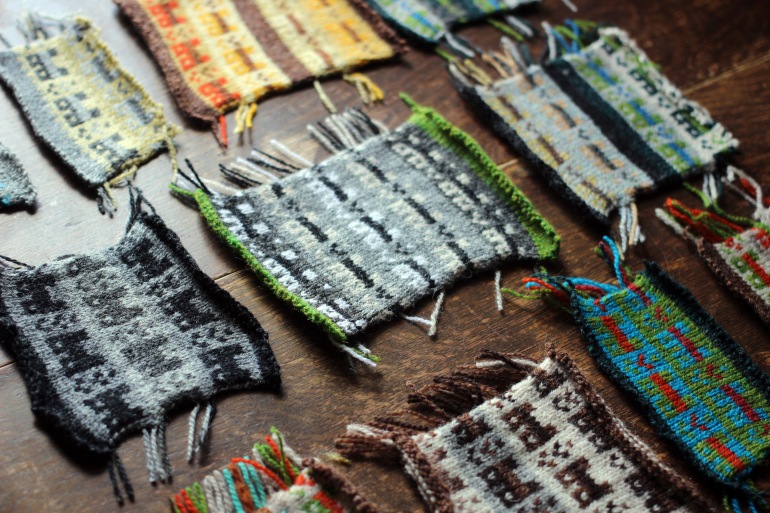 I don’t do a lot (understatement) of swatching, especially for small projects like hats/mitten but for my Crofthoose Yoke I did take the time to do lots of swatches on my machine of the Crofthoose motif. Mainly because I discovered when putting together the hat colourways that it has a more graphic finished effect than traditional Fair Isle which can be quite subtle. The blockness.. if that’s a word.. of the hooses means you need to think a little bit about how you arrange it. I have found with this pattern it works best to be bold! In case you needed reminding the first colourway I came up with for the finished hat was the J&S one:

My general rule of thumb for this is you want to go dark for your cast on colour – FC58 in this case, dark/bright with your house colours – FC39 and FC11 and then light with your two background shades – 202 and 2. Here’s two more quickly put together examples:

You can turn this theory on its head however by going light on your hooses/cast on colour and dark with the backgrounds, it will have a more subtle but still effective result. I’m not going to go into any detail about colour and value – mainly because I don’t stress too much about it but also many other people can do it better than me (see here and here for example) but basically if you’re not sure about a colourway you can take a photo on your phone then put it to black and white and see you have enough contrast. Here are some examples of colours I think do work together and give enough contrast between the background and foreground: (PS all the swatches I do on the machine have raw edges which you can see at the top of them, I’ve washed and Ironed them and they haven’t run down, one reason I love Shetland Wool!) 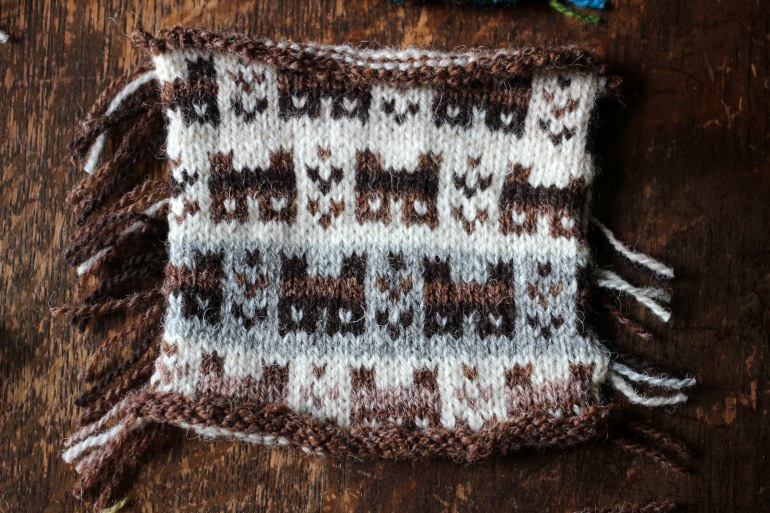 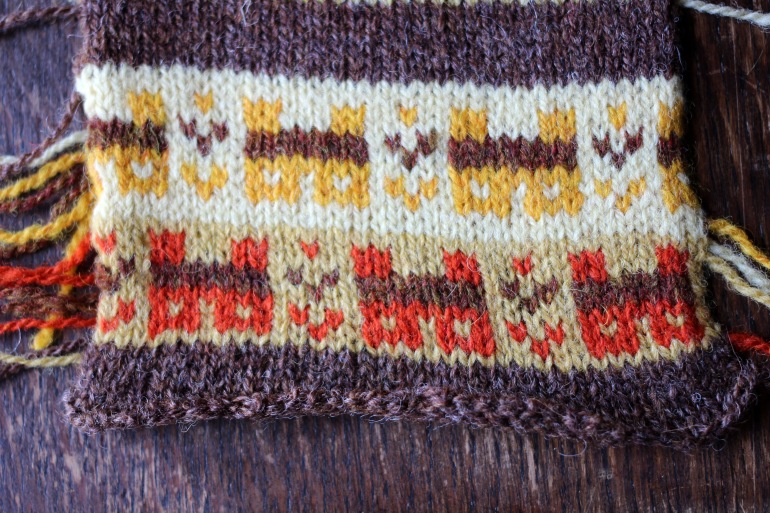 The main thing that makes it tricky is sometimes a colourway can look great in ball form but when you try it out it just doesn’t work, these are like that, in the ball (or cone in this case) they looked great but it didn’t translate to the knitted fabric, either because of the background colour or the contrast between the house and roof shade: 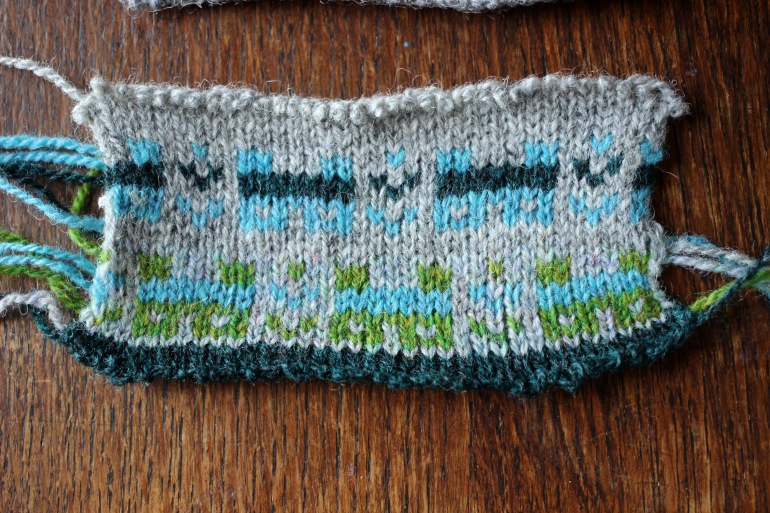 This one below is an example of one-half of the swatch working but not the other, you can see the darker main grey on yellow works really well but by switching the greys around and giving a darker background colour the houses just don’t pop the same.

Another problem you might come across is things working in person but not translating well in photography which is like the one below, I actually made a sample of the Crofthoose Yoke in this colourway and I wore it to Edinburgh where it got lots of nice comments but somehow in photos it just doesn’t look as good. But at the end of the day – as long as your happy with it.. who cares!

You can also get ideas from knitwear, in this case, some of my vintage knitwear gives surprising ideas to how colours work together in a row, by isolating them and seeing how they react with the shades around you can get more inspiration..

I hope this has given you some ideas as to putting your colours together for your hat, it’s also worth remembering though – don’t stress about it – If it doesn’t look right just rip it out. It’s only knitting :) Another way to get inspiration is to have a look at the finished projects, there are over 150 on Ravelry and it’s a great way to spark ideas!

If you’d like to take part in the KAL then head over to my Ravelry group and get chatting about colours, yarns, whatever you fancy! It will run until September the 1st so lots of time to get involved. If you do knit a hat remember to tag your photo’s on Ravelry with the #crofthoosehatkal so I can see them all!