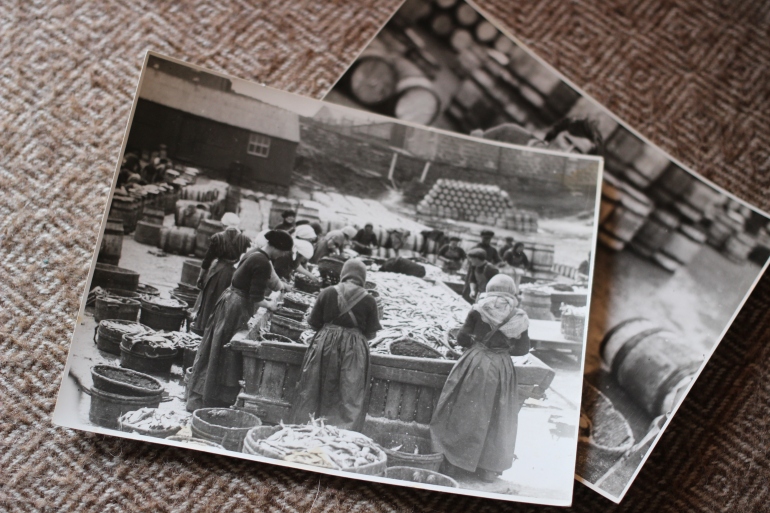 I recently bought these two photos from the saleroom, the photos themselves are nice and they cost me the mighty sum of two pounds but what the photos represent was really why I wanted them. Since I bought them they have sparked an interest in me about my family and the role they played in a huge aspect of Shetland history. 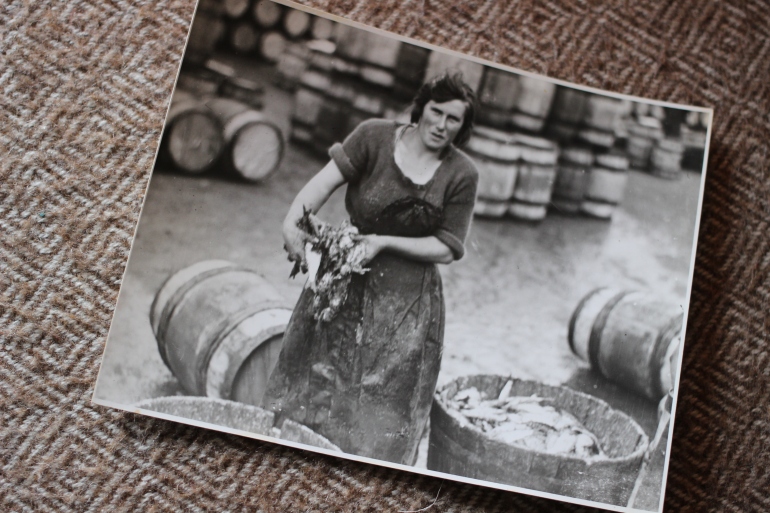 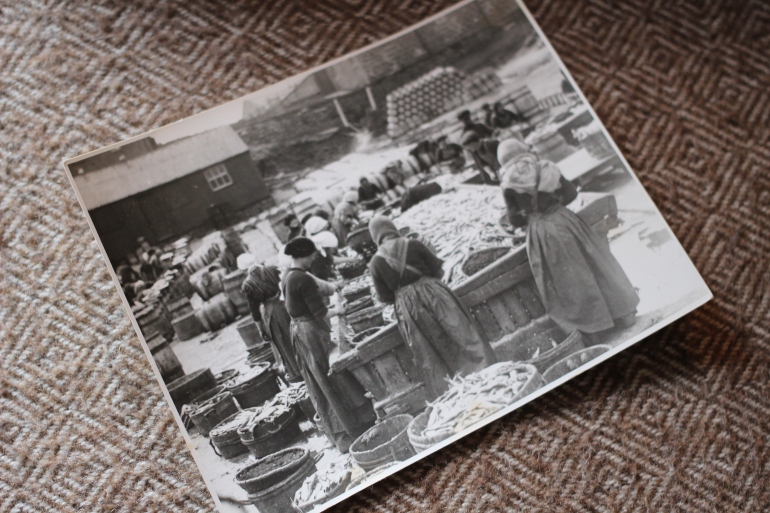 I don’t come from a textile background, I have mentioned that before and it’s why I think I seek out as much Shetland knitwear as I can. But one thing I am connected to which was at a point one of Shetlands largest industries, the Herring industry. Shetlands main industries historically were Crofting, Fishing and Knitting. As times have changed these things have peaked and dipped but from the late 1800’s until the mid 1970’s Herring fishing in Shetland was a big deal.

My Great granddad Magnus Shearer (my dads granddad) alongside his brother Arthur and Uncle James started their Herring fishing company in 1919. Magnus and Arthur were born in Clate, Whalsay in 1890 and 1894 respectively. Their Uncle James was born in 1867 and during this period the Herring Industry was booming. To give you an idea in the year Magnus began his apprenticeship as a cooper (they made the barrels the herring were put into) there were 1783 boats working, over 21,000 people employed (the 2015 Shetland population is approx 22,000 people total!!) producing well over a 1,000,000 barrels of cured herring.

During the First World War understandably the industry died down and both Magnus and Arthur served with the Gordon Highlanders and after they were demobbed and came home the industry was beginning to grow again, most of Europe was on the brink of starvation after the war and herring was a main food supply. To that end they established J&M Shearer in the Summer of 1919. Initially they set up a small curing station at Scarfskerry where the Lerwick Boating Club is located now. (I worked at the boating club one summer when I was at College) after a few years they moved to Freefield where they rented a jetty from Hay & Co, they also operated a station in Whalsay from 1922. In 1928 they were able to purchase the whole Garthspool property in Lerwick they then were able to also purchase the former whaling station in Collafirth, Northmavine which had been turned into a Herring Station (this is the area my Mams side of the family now stays) This huge growth and additions to the company gives you an idea of how strong this industry was.

During this period although there was huge growth the industry fluctuated terribly year on year, Shearers was best placed because it had the three stations and were able to rely on their workforce. Early each season Arthur and latterly Magnus’s son, Magnus M (my Great Uncle, my Grannys brother) would go to Whalsay to hire some of the gutters for the coming season, paying them ‘Arle Money’ this was a rough contract, to show that both parties were committed to working together in that season. Mostly the women worked for Shearers year on year, probably because the men were originally from Whalsay and they had a good relationship with them. The ladies worked in groups of three, two gutters and a packer. In Lerwick there was the need for up to 10 crews of three with Whalsay having roughly half that at its peak. The work was dirty,cold and painful. The two gutters would gut the fish while the packer packed the Herring in tiers of salt in barrels, the rate of gutting was extremely fast with about 30-50 herring a minute so every morning the ladies would tie bandages over their fingers to avoid being nicked or cut by the special sharp knife they used to gut the fish. If they did cut their fingers the salt would enter the wound and make it extremely painful.

After the outbreak of the Second World War the herring fishing went down dramatically, again my Great Grandad Magnus was enlisted to the Gordon Highlanders but due to his age (49) he remained in Shetland as Movement Control Officer, during this time he also became provost of Lerwick from 1941-1946. To keep things going Arthur stayed on to run the business during the war and he also ran the Whitefish side of the business which had been established to give the coopers extra work during the winter.

Some Summer herring fishing still went on at this time but on a much smaller scale as the yard had been taken over as an Army camp. Both the herring and whitefish was controlled by the government and the story goes that all the cured herring during the war was used to feed German Prisoners or War at POW camps throughout the UK.

After the war my Great Uncle Magnus joined the family firm and his cousin, Arthur’s son, also called Magnus (its a strong family name, what can I say!) went into the cooperage to serve his apprenticeship. In 1945 when all the fishermen returned home from the war Shearers decided to put all their boats back out to the fishing (they had been being used as ‘flitboats’ to transport goods between the stations and then in War service) and built back up the Shetland fleet. The industry never recovered completely after the war and the demand for cured Herring was beginning to fall, however the demand for frozen Herring was beginning to rise and J&M Shearer installed Ice factories in 1945,1948 and the flake ice plant in 1960. (one of these buildings is now the offices of the Shetland Amenity Trust) Gutting machinery was also installed in 1964 which improved the conditions for the workers but quality became more of a problem. The company was bought by HPB (By Products) LTD in 1970 and in 1977 on the 1st of January a complete ban on herring fishing in the British Sector of the North Sea began essentially ending 250 years of Herring Fishing in Shetland and ending the Shearers involvement after over 60 years.

Of course by the time I was born in 1990 this was all long over but there are little reminders of Shearer’s everywhere down on the sea front in Lerwick, I feel a strong connection when I walk along there which I do often. My work at Jamieson & Smith is near to where the stations were located and you can see it in the background of lots of the photos. The herring gutters that came up to work in Shetland were the reason Jamieson & Smith started doing a Mail Order service, one of the first in Shetland, so the gutters that came up to work in Shetland in the season could carry on knitting when they got home. It’s hard for me to appreciate how difficult it must have been for my family when the business began to fail as the industry died. They kept it going in different forms but when I read how parts of the business were broken up and sold off it makes me feel for my not so distant ancestors. I wish my Granny was still here so I could ask her about it, although perhaps it was upsetting which is why I don’t know too much about it all. Or of course I could be being dramatic (me? never..) and that was just how the world was changing. All the information I have and all the photos were kindly given to me by my cousin Young Magnus, my Great Uncle Magnus’s son. He gathered together what he could from memory and research because the official records of the business were lost or destroyed when they were relocated to the offices of the then parent company HBP (By Products) LTD in 1984 when they sold off the business and assets of Shearers. An interesting thing young Magnus also sent me was a transcript of a recommendation letter which my Great Granddad received when he was looking to emigrate to Nova Scotia as a Fisheries Officer after a particularly difficult Herring season in 1920-1921. As he pointed out, who knows if his optimism took over or if he had already met and fallen in love with my Great Granny Flora Stephen as they were married in December 1922. In any case, it’s a good job he didn’t or I likely wouldn’t be here today!

I hope this history is vaguely interesting to some of you, I’m glad I got those £2 photos..! As an aside my nephew is also called Magnus, he’s not a Shearer but his dad is from Whalsay..

Fryer, Linda G. “Knitting by the Fireside and on the Hillside”: A History of the Shetland Hand Knitting Industry C.1600-1950. Lerwick: Shetland Times, 1995. Print.

Leave a Reply to Kathy in Michigan USA Cancel reply