Hello everyone, happy new year and all that jazz.. today I thought I would show you something I’ve started to do with some of my vintage yokes which is to lower the neck. Traditional Shetland yoke jumpers have not only a high neck but it can be quite a deep rib and its also quite often doubled over. Sometimes I really don’t mind it but other times its just too high and too tight. So rather than leaving them languishing in my collection, I have started lowering them and I do wear them much more often.

I got a yoke in the charity shop the other week and thought I would photograph some of the steps to show you what I did and show some of the others I’ve done it to as well. You can see the doubled over neck here: 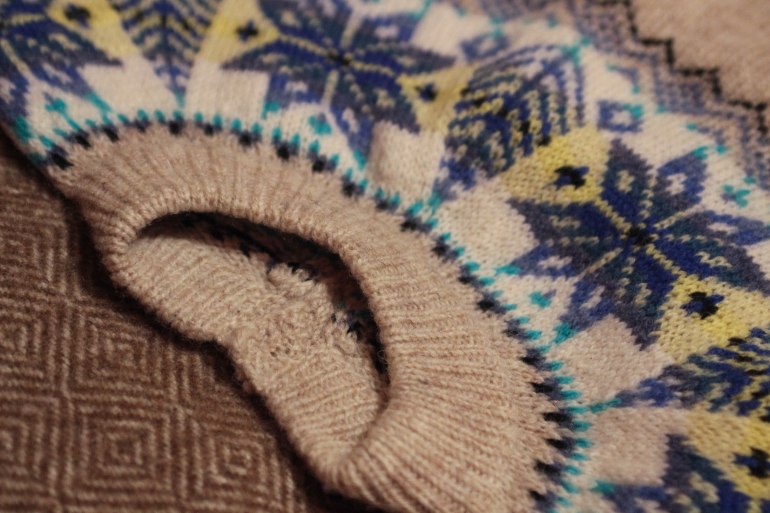 As we do in Shetland cuffs are very often machine knit and grafted on (this includes bottom ribs, cuffs and necks) – this means a very even rib and obviously its much quicker! so I remember the first time I did this I thought I could unfold it, pull out a lot of the rib and just recast it off, with many this cant work because the rib is technically upside down and the cast on edge is whats folded down and the stitches were grafted onto the yoke. So that’s why I do it the way I do..

Whats different in this yoke as to others I’ve lowered is it also has a back neck button band which I wasn’t totally sure what I was going to do with initially. As an aside this yoke wasn’t too bad until you did up that button band then I felt like my head was going to fall off! 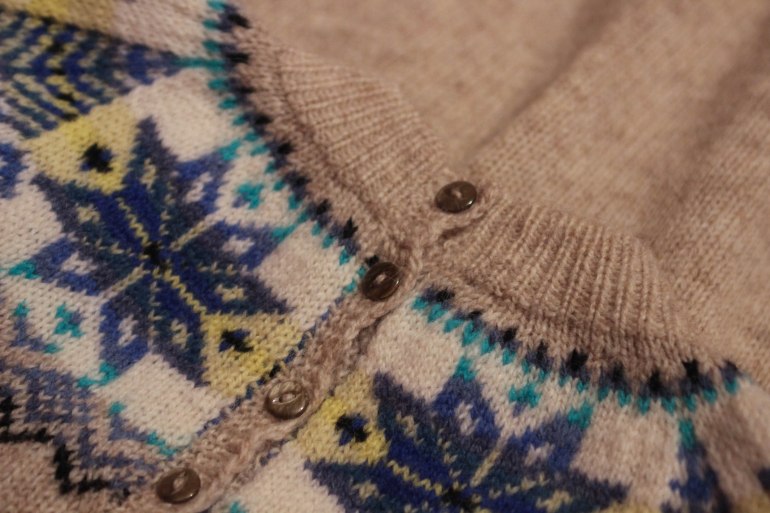 So what you need to do if it is a folded over neckband is go inside and find where it’s sewed on, break the thread and remove it: 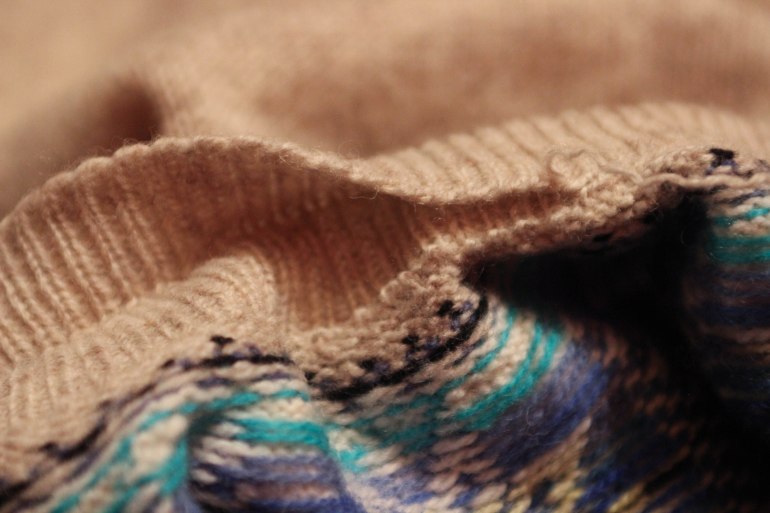 I just stick a thin knitting or tapestry needle in and pick it out, you can see the cast on edge as it’s unfolded – try to preserve as much of the neck as you want to use the same yarn to reknit it later. 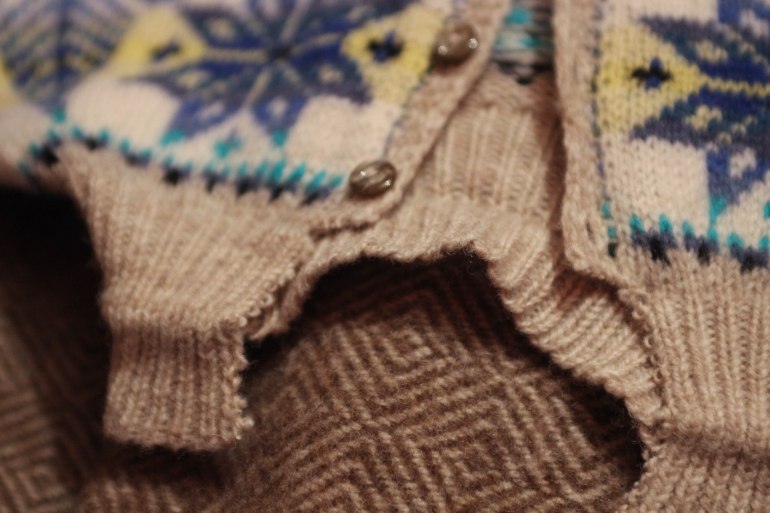 Here it is unfolded and you can see I just cut the button band to begin with in case I could salvage it but I actually ended up taking it out – I didn’t like how you could see the steek stitches on the pick up and I came up with a good idea which you’ll see later, ANYWAY.. you then want to go in with a tiny needle (like 2mm) and pick up one leg of every stitch just above where the colourwork ends: 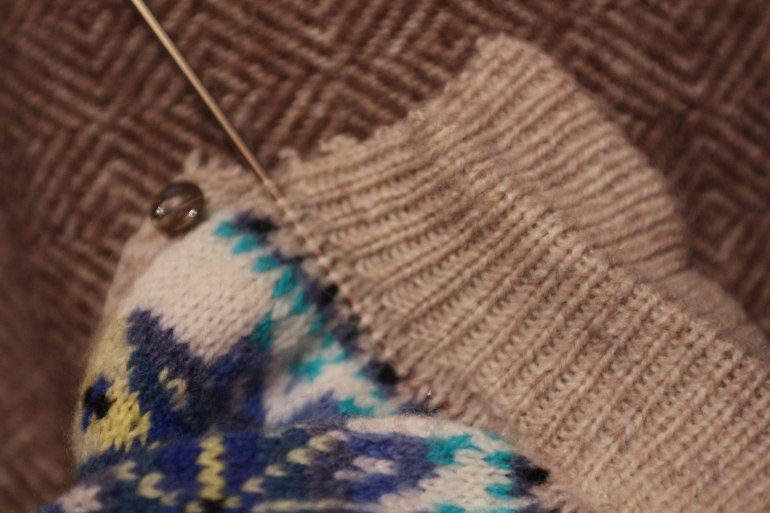 It can be tricky to ensure you’re sticking to the same row but if you either do it one row above the fair isle or one below the rib it’s easier to keep track. Then as carefully as you can and not cutting any of the stitches you have picked up you chop off the neck! (You can also chop the wool at the edge and pull the end out stitch by stitch around the ones on the needle, this is slower but definitely neater) 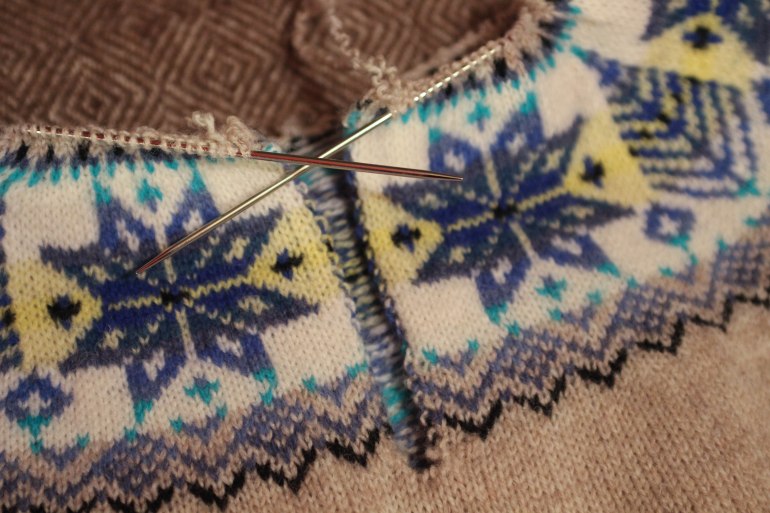 Here you can see I’ve removed the button band so I could get a clean edge on my rib. You basically knit 1 or 2 rows to make sure everything is a-ok, pick up any stitches you missed and also to decrease to the st count you want, I always go for 100 sts. I check this because if there’s not much room between the yoke and rib you can go into final decreases and break them up when you remove the neck and pick up sts so it just means you know you will have the right amount of stitches.

So then I just go ahead and with the neck that ive removed, rip it back and reknit the neck using that wool. Although it is crinkly and can look a bit funny initially it settles down and I would rather have the exact match if I can – although weirdly most of the yokes ive done this with have been fawn, fawn has changed a lot over the years! I usually do 5 rows then cast off using a stretchy cast off, I usually use this one

You can see not too uneven considering how long the wool was in a rib for! For the button band I ended up picking up stitches, moss stitching about 10 rows then grafting it onto the other side, thus making a fake buttonband! I resewed on the buttons and you’d never know! Although the bottom of the fair isle is now not in line which is annoying but it still looks good. 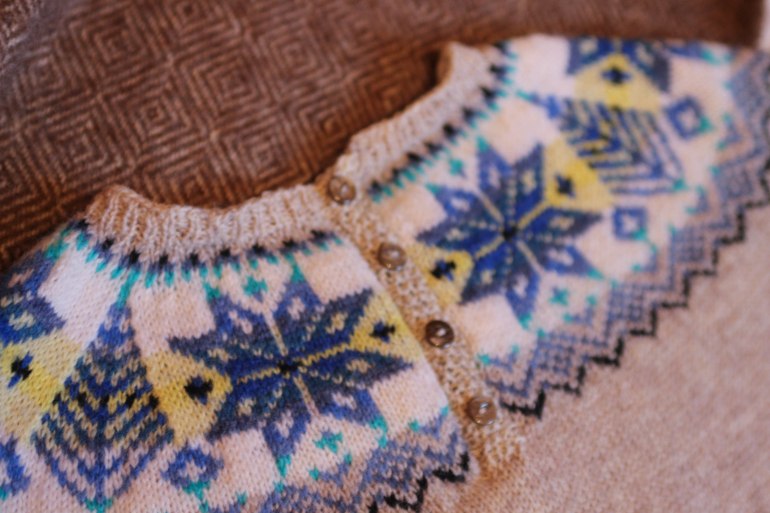 So that’s how I did that one, here it is on now:

Much better – also im not a purist by any means but I really don’t dig that tree being in the middle, I wish it was a star. Never mind! It’s so much more comfortable on, here are a few others I have done: 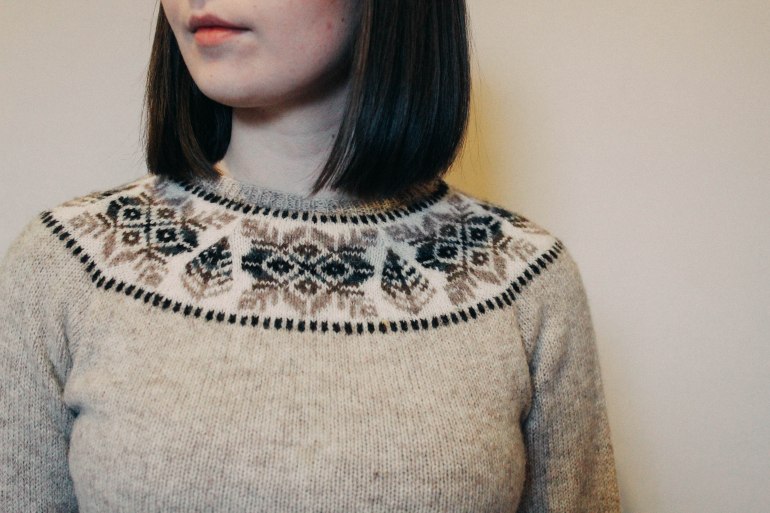 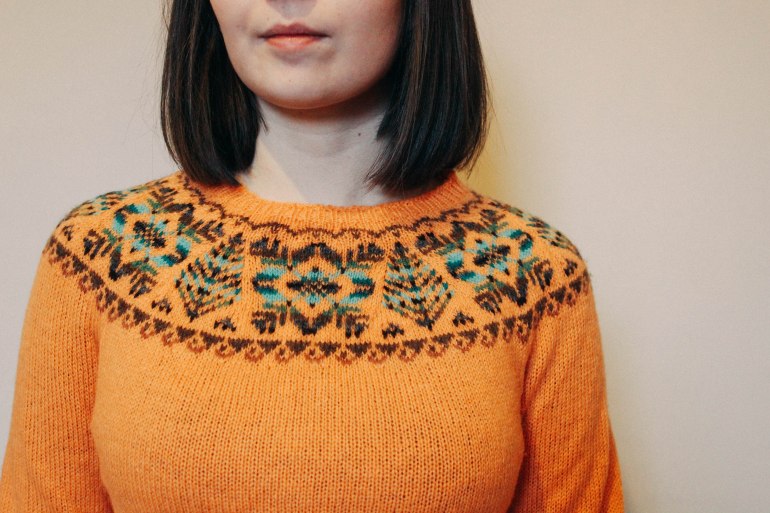 I think I’ve actually shared all these on instagram which shows how succesful its been as I usually only take photos of stuff on that I actually wear. I hope this is somewhat helpful/interesting. I know how annoying it is when a yoke is so nice but just too high. It works great for jumpers but I’d be unlikely to do it on a cardigan only because you’d have to remove both buttonbands and I really dislike knitting them as it is.. I got another yoke the other day (fawn again!) so I’m just at the stage of working the initial rows:

This one actually had a neckband which had been linked on, and it was quite felted so it was a bit more fiddly, I am still learning and each time it is different!

ps. thanks for all the support in 2018, it was a tough year for me but i’m hoping to blog more, design more and all round just live my best life in 2019 so fingers crossed.

26 thoughts on “lowering the neck of a vintage yoke”