Hello everyone, thank you so much for all the lovely comments on my last post. Sometimes I feel (especially at the moment) very lonely and it was a lovely reminder how many of you are there and interested in what I’m up to.. I’ve managed to finish two more tops since I last posted – one which was my whole plan during this lockdown – to finish projects that have been on the go for a while and the other.. well after finishing the other tank top I was on a roll and wanted to make another. 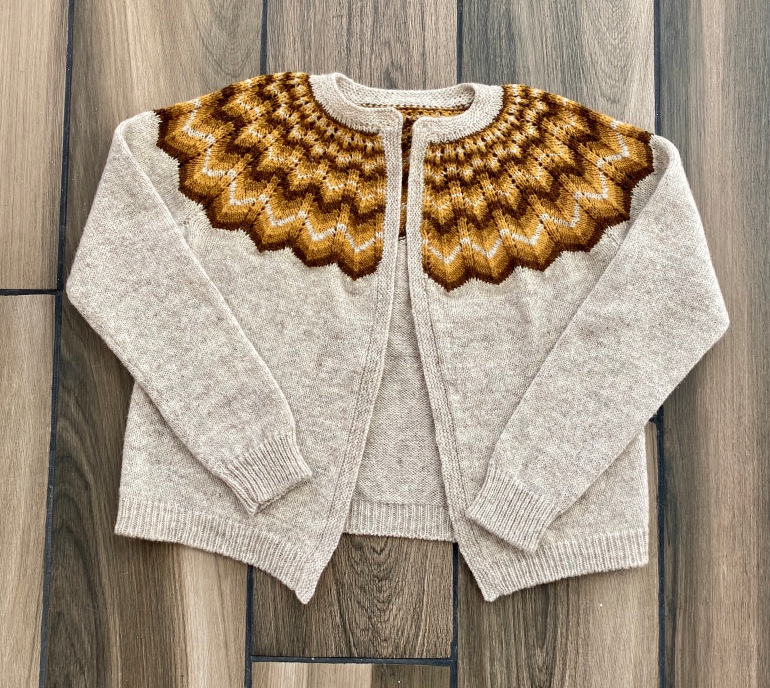 firstly my UFO – I started this yoke last year with my usual reckless abandon then as life got in the way as it tends to do I set it aside, I had joined all my bits together and started the yoke but that was about it. Its knit in Shetland Supreme shade 2006 (fawn) as the MC and then three shades of naturally dyed Mascot Fine from Woollenflower. Its just a simple Lacy Shetland yoke with extra decreases as you go up the yoke. I put a steek in the yoke then cut that open and worked the button band continuously the whole way round increasing two stitches at the top corners so it went around nicely. 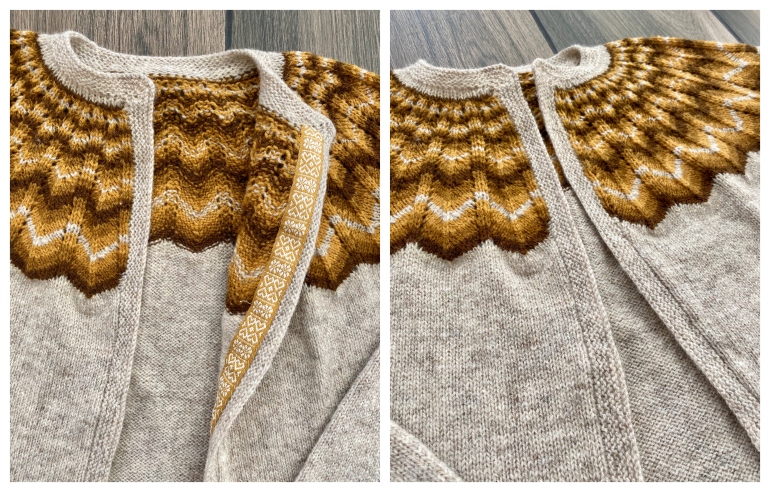 Since time is one thing I do have at the moment I even sewed in a ribbon (bought from Textile Garden) to cover the steek and reinforce the button band area, I didn’t add buttons and buttonholes as I rarely button my cardigans anyway. If I’m using naturally dyed wool I like to pair it with natural colour and the dye lot of 2006 is really gorgeous. Pleased to have one less project languishing in a project bag and the Cat even approves/ matches it.. 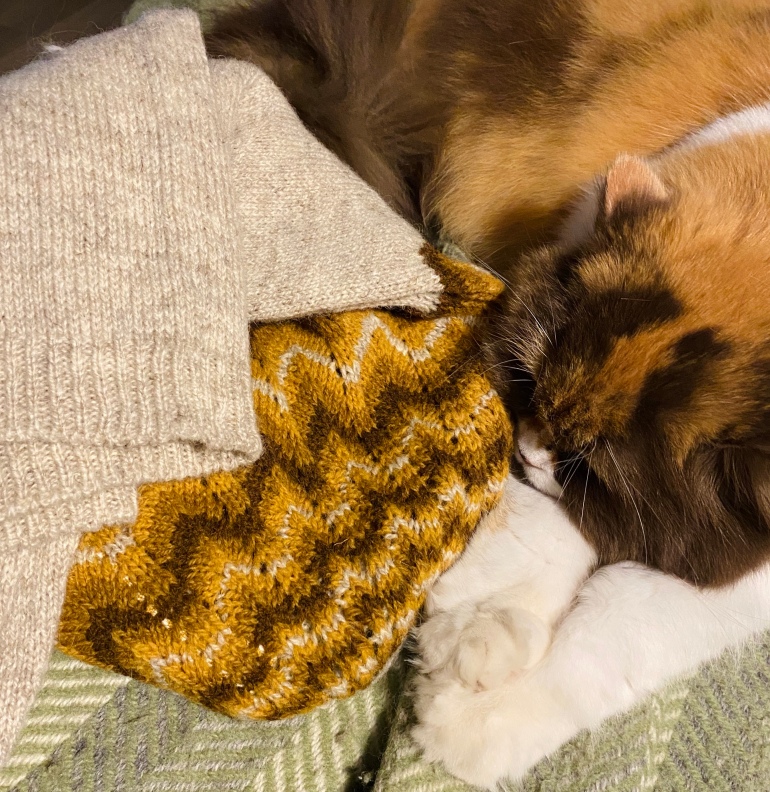 Now onto my wildcard.. I save pictures of all manners of knitwear for inspiration and I wanted to make another vest in DK wool which reminded me of my sizable stash of Langsoond Wool, so I looked through my inspiration pics and came across this one of this gentleman smoking a fag in front of a peatstack: 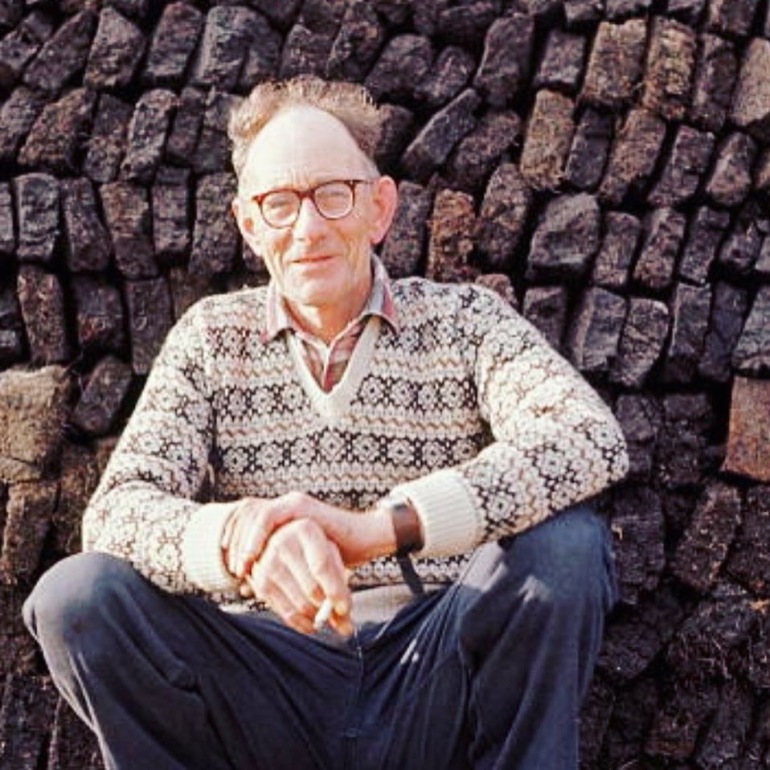 Its a classic Shetland allover but it didn’t use too many colours which were what I needed, Langsoond comes in 100g hanks so I chose 5 shades (more info on my project page) – only one of which I had two balls of. I charted in up and even knit a small swatch just to check it looked right then I initially casted on in waste yarn as a: I didn’t know if I might need to do my edgings in one of the other shades and b: I hate knitting rib (well I did.. more of that later) so wanted to go right into the Fair Isle 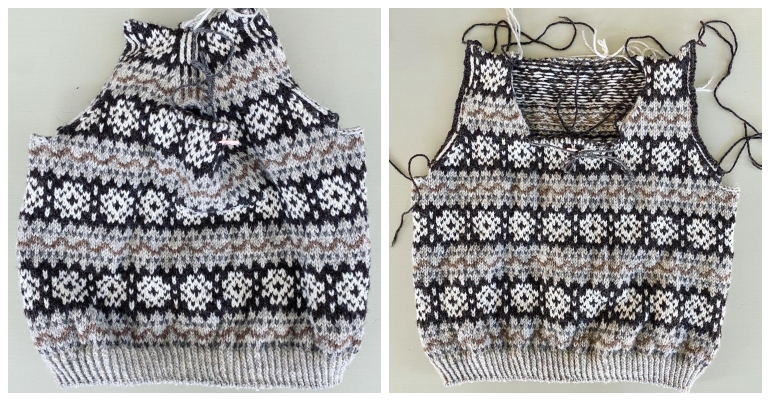 So basically I followed my Carriag Fhada number and used my new chart, I had to make some changes so I ended up where I wanted my neck to be (i.e I didn’t want half a pattern at the under the neckline. and I also just winged it at some points because I couldnt be bothered to go get the pattern.. I steeked all the edgings so again you have no idea if it will fit until you are finished but at this point, I realise I am really a process knitter so that didn’t worry me too much. On my last vest I stupidly did my crochet steek reinforcement with DK acrylic I had from my Katies Kep and it fell in rubbish so I used the Langsoond and it came out good! I did 5 steek stitches for the arms and 7 for the neck – it still made quite a bulky edging so after I was finished I went back and re-crocheted around the edgings and cut off the excess so it’s a bit better now. 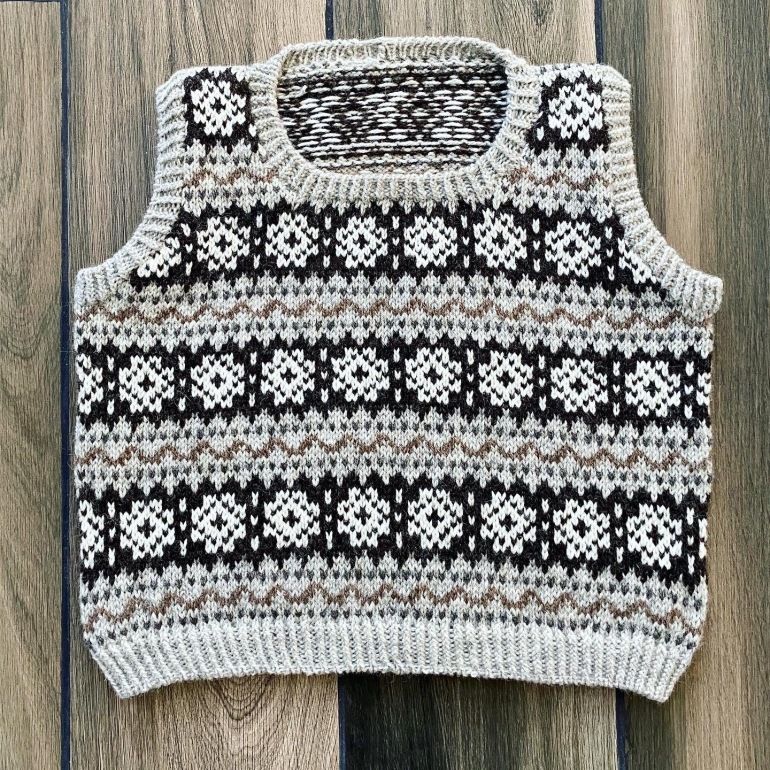 You may be thinking my ribs look quite nice and yes you are correct and also thank you for noticing. I ended up deciding to stick with my MC (Stane) for my ribs because I still had most of the second ball of it and on the original jumper it doesn’t have a different colour, I decided to use a twisted rib *game changer!!!!* my rib looks so neat and I actually find it easier than normal rib. I often have issues with casting off too though – its either too tight or too loose so, since I was in no rush, I also decided to try a tubular bind off… *another game changer!!!* It came out so bloody neat! Yes, it is a total faff and takes a while but it’s really worth it. 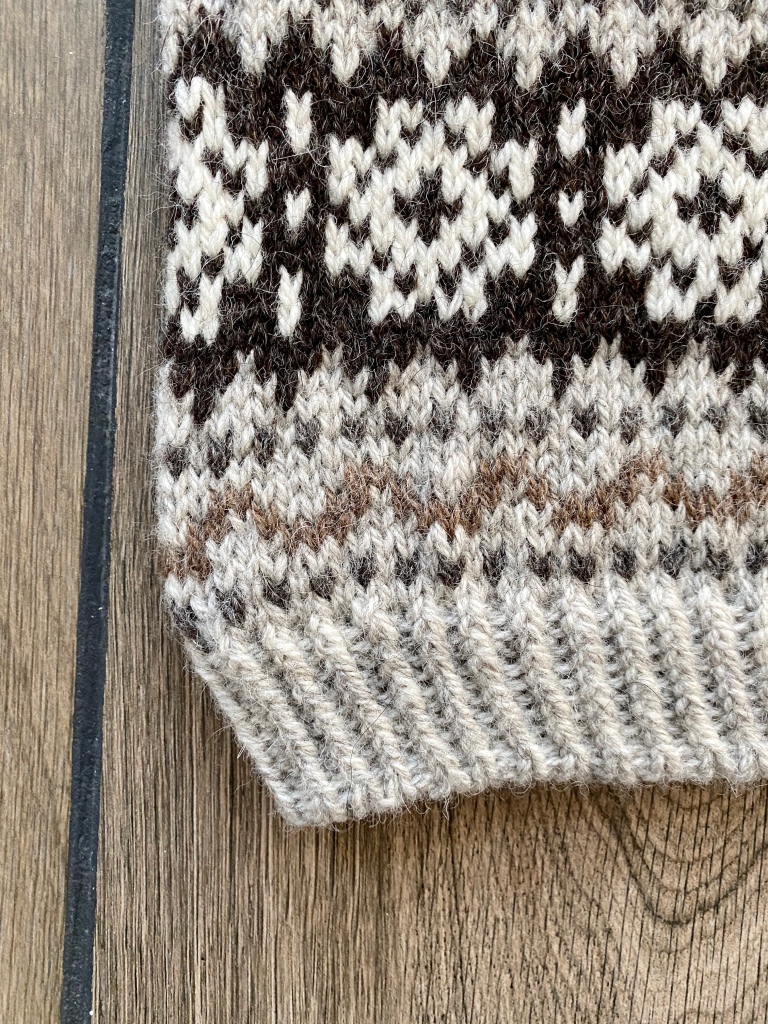 So that’s whats I’ve been up to when not working, from last Saturday til Yesterday we have had glorious sunshine here in Shetland, bit weird when the world is imploding but nice all the same. I hope wherever you are you’ve been able to knit or at least get out some of the time, speak soon!